Kendra Kennedy Biava's great grandfather, George E. Kennedy, started his Indian trading career in 1913 by building and operating the Salina Springs Trading Post at Tselani, AZ. He was known as Hosteen Tselani. In 1916, he sold that store and purchased the Chinle Trading Post at the mouth of scenic Canyon de Chelly. He sold that store in 1922. The new owner renamed it Thunderbird Ranch and Trading Post. Today, it is the Thunderbird Lodge. George Kennedy later owned and operated the Rock Springs Ranch and Trading Post northwest of Gallup until the beginning days of the Great Depression. In the 1940's - 1960's, he owned and operated G E Kennedy & Sons in Gallup. This petroleum distribution business supplied many of the trading posts in NW NM and NE AZ.

Kendra's grandfather, John W. Kennedy, grew up on the Navajo Reservation and learned to speak Navajo. He used that language throughout his life. John developed a keen appreciation for the history of the Anasazi and Navajo, even maintaining a complete set of the annual reports of the Bureau of American Ethnology. He started his career with the Gallup Mercantile Company, which supplied groceries and Coca Cola products to many trading posts.

For several years in 1940, John worked in Zuni with C G Wallace at his trading post there, learning to speak the Zuni language. John was one of the three original partners of the California Markets in Gallup, joining two Italian immigrants. His knowledge of Navajo and Zuni and their handcrafts resulted in him setting up a trading business within the grocery store. By 1955, he purchased Gallup Indian Jewelry from the Merc and grew it into Gallup Indian Trading Company. GITCo became the largest distributor of handmade Indian arts and crafts in America. DJ Biava's grandmother, Anna Biava, was John's bookkeeper for many years until she passed away. When Kendra's grandparents moved to Albuquerque in 1980, they started Kennedy Indian Arts, which operated for nearly thirty years.

Kendra Kennedy Biava grew up hearing all of these stories and seeing some of the art and crafts from Plains, Pueblo, and Navajo tribes. While she was in college, she often drove her Granddad on selling and trading trips to the Northern Pueblos and the Rez. She learned much about Indian trading by listening to his stories. It's an interesting turn of fate that Kendra's and DJ's grandparents worked together for many years. 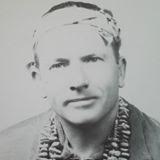 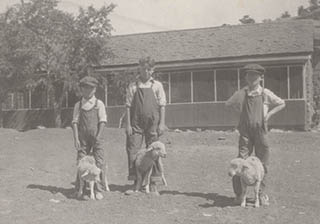 John W. Kennedy and his brothers George and Fred growing up at Canyon de
Chelly, 1922